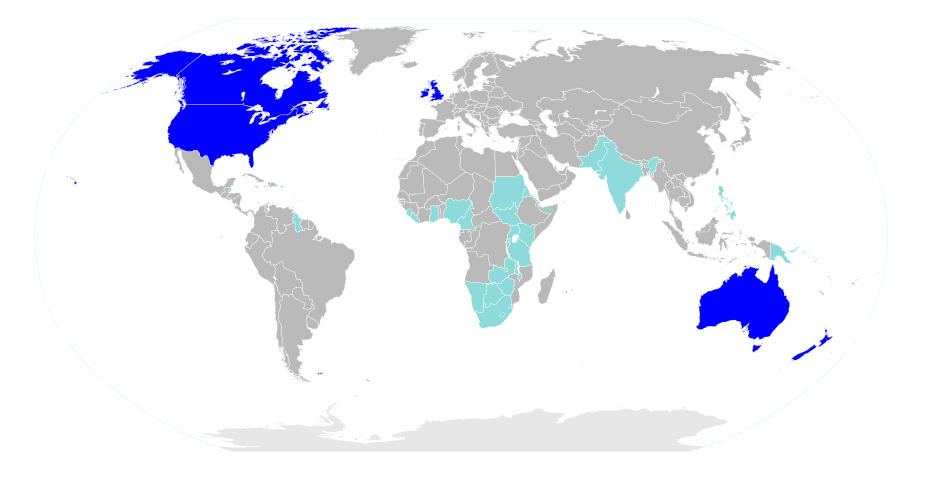 English is a West Germanic language that was first spoken in early medieval England and is now a global lingua franca. It is an official language of almost 60 sovereign states, the most commonly spoken language in the United Kingdom, the United States, Canada, Australia, Ireland, and New Zealand, and a widely spoken language in countries in the Caribbean, Africa, and South Asia.
Nearly 375 million people speak English around the world. There are more than 50 English speaking countries, where English is the official language.
The largest English speaking countries are located in North America: the United States and Canada. (Although English and French are both the official languages in Canada, 85 percent of that country’s population speaks English). Also, several Caribbean countries speak English. These are primarily the countries that were colonized by England, including Antigua and Barbuda, the Bahamas, Barbados, Jamaica, Grenada, and the Turks and Caicos Islands. Bermuda, still a part of Great Britain, speaks primarily English as does the tiny, Central American country of Belize.
The English language has its roots in northern Europe and so it is fitting that it is widely spoken there. More than 98 percent of the residents of the United Kingdom (England, Scotland, Northern Ireland, and Wales) speak English. In addition, English is the official language in the Republic of Ireland and the Isle of Man.
Major English speaking countries outside of Europe and North America include Australia, Nigeria, New Zealand, and South Africa. English is also the official language in Guam, Singapore, and the Philippines. Though only the 12 per cent in India speak English, it is millions of people in that densely-populated country.
Due to the proximity of English colonies to other countries, in cases such as Jamaica and Gibraltar, the contact of the two languages has resulted in a new language such as “el llanito”:

Glossary:
Lingua Franca: it is the use of a common language used by speakers of different first languages.
Llanito: gentilic (people living in Gibraltar) and the result of the combination of two languages (Spanish and Spanish).